Political Ideology, Social Media, and Labor Unions:
Using the Internet to Reach the Powerful, Not Mobilize the Powerless
JEN SCHRADIE 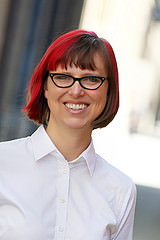 Institute for Advanced Study in Toulouse, France
How does ideology shape digital activism? The implication of existing scholarship is that ideology is less relevant in the digital era or that radical groups have the advantage and thus will have higher levels of digital engagement. By conceptualizing organizing ideology as an articulation of ideas, practices, and organizations, this study harnesses qualitative research to understand the ideological mechanisms of differential social media use between two labor unions. Going deeper than a simple left or right political
orientation, this study demonstrates that ideological differences in political strategies shape digital activism. A top-down reformist union had much more of an active Internet presence. It practiced representative democracy and embraced the Internet primarily as a conduit to those in power. A radical union was bottom-up and participatory, yet had low levels of digital engagement. This union viewed the Internet as just one of many tools to organize the powerless rather than a way to reach the powerful.